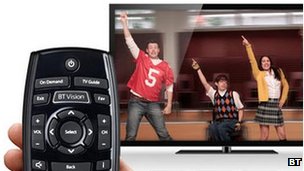 BT Vision (BT’s subscription digital TV service) topped the complaint table having received 0.27 complaints for every 1,000 customers according to a recent survey conducted by Ofcom.  Ofcom published it first complaints data for the pay TV sector and BT Vision was the most complained about ahead of Virgin and Sky. But funnily enough, BT said calls to it technical help desk had fallen to their lowest levels since it launched BT Vision!

The BT Vision service attracted nearly 4 times as many complaints as its closest rival in the first three months of 2012 according to Ofcom! And we can’t say we are surprised with the number of complaints received about BT Vision here at btcomplaint.com

Ofcom said its research was designed to provide useful information for consumers, while incentivising operators to improve their performance. It has gathered and published similar data on telecommunications operators for the past 18 months.

The regulator said the complaints around BT Vision related to billing and sales processes rather than technical problems. BT justified its position at the top of the league table by saying it is a “hybrid” provider reliant on Freeview delivery via people’s own aerials, which sets it apart from Virgin Media and Sky.

In the six years since launch BT has invested an estimated £800m in the product, to date attracting only 700,000 subscribers – nowhere near its target of 3 million by 2010. The company also recently agreed to pay £738m for 114 Premier League football matches over three seasons.

“Where customers have experienced problems, we have identified and fixed the causes. We have also made a significant investment in a new TV platform, to which we are moving new customers for further reliability and ease of use.”

He said calls to the technical helpdesk had fallen to the lowest level since BT Vision was launched in 2006, and that independent surveys showed high levels of satisfaction with the service, “but we are not complacent, we will continue to work towards even greater reliability, compelling and convenient film, TV and sport at a lower cost and therefore better value than our competitors.”

The report is the fifth quarterly survey from Ofcom analysing the volume of complaints about telecommunications companies providing broadband, landline and mobile telephone services.

The data covers telecoms and pay TV providers with a market share greater than 4% which, for pay TV, is just three companies: Sky, Virgin Media and BT Vision. The data now covers 18 months, allowing consumers to check providers’ performance over a sustained period of time.

Overall, complaint levels are much lower for pay TV and mobile telephone services than for landline telephones and fixed broadband services. In the landline market, Ofcom received the most complaints over the three months from customers of TalkTalk Group, with 0.72 complaints 1,000 for every customers. The least complained about provider in the same period was Virgin Media, generating just 0.16 complaints for every 1,000 users.

Mobile provider 3 remains the most complained about in its field, with 0.14 complaints for every 1,000 customers – more than seven times as many complains as O2, which remains the leading provider with just 0.02 complaints.

The findings chime with the volume of complaints about BT Vision and TalkTalk made to the Bachelor and Brignall column in Guardian Money.

Written By
admin
More from admin
Submitted by Kerry in October 2016 I am sick and tired of...
Read More