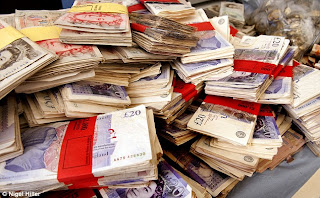 A pensioner who wants to switch to broadband was quoted £150,000 by BT. Silver surfer Beverley McCartney, 71, hoped to get a high-speed connection to view her favourite websites. But she thought again when BT said it would cost her £129,613.54 plus VAT.

Beverley, of Salem, near Llandeilo, Carmarthenshire, fumed: “It’s outrageous. I’m not on top of a mountain in the middle of nowhere – it’s rural but not a wilderness.”

BT said the cost reflected the extra equipment needed to supply one individual.

BT responded to a broadband line activation request made by Beverly McCartney with a quote for over £150,000. BT, clearly realising that a pensioner might find this figure hard to bear, decided, through the goodness of its heart, to foot £8,000 of the total bill.

Unsurprisingly, Mrs McCartney initially thought the quote was a typing error, however after talking to a BT employee, was told that it was indeed the current amount. To top things off the employee lectured the pensioner saying that “other people have had bills for more”.

According to BT spokesperson Chris Orum, BT is making a “multi-billion pound” investment in its UK network and presumably the firm wanted Mrs McCartney to help out in no small part with this charge. While it is true that there can be occasions when, due to geographical location, utility companies charge the customer to install infrastructure, that usually pertains to commercial facilities, such as in the case of BT, laying fibre-optic cables into datacenters and large office blocks, not “up-to 24Mb” broadband.

The pensioner admits that her abode is located in a rural part of the country, but that it isn’t “on top of a mountain in the middle of nowhere”. A claim that is confirmed, to some degree by BT. Orum said that the Mrs McCartney’s home village of Salem, near Llandeilo, is not a “broadband not-spot”. This begs the question, why quote such a ridiculous amount for broadband activation?

As for Mrs McCartney, who is seeing the funny side to the whole palaver, BT’s quote should mean that she, and her town of 50 houses, will either have to pony up the 150 grand or live without BT high-speed Internet.

Written By
admin
More from admin
Around 10 million BT customers are being told that phone and broadband...
Read More