A February 2010 update on BT’s broadband services and what is planned for the future. Lets hope BT can fix and improve existing problems with customer services and all other related BT complaints that can be found on this website.

Around half of all homes and businesses in the UK now have access to faster broadband thanks to BT, it has been revealed. The company’s Wholesale Broadband Connect service, which offers connection speeds of up to 24Mb, is now believed to be available to over 730 telephone exchanges across the UK.

It is hoped that the technology will be available to around 14 million people by the end of March 2010, while 20 million could have access by spring next year.

Sian Baldwin, Director of Broadband and Content Services at BT Wholesale, said 20,000 to 30,000 sites are being given access to the network every week. She added that the technology can support “growing demand for high-speed access to a range of online services, including television, gaming and multiple voice over internet protocol (VoIP) services”. Last month, BT announced the launch of its Infinity fibre-optic broadband service, which offers connection speeds of up to 40Mb.

BT opens up its ducts to broadband fibre rivals
BT has said it will allow rival broadband companies to use its tunnels to lay their own superfast fibre networ. 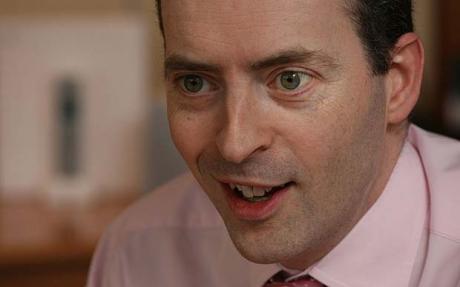 In the pink: Ian Livingston could be paid a cash bonus of more
than £680,000 this year Photo: Sarah Brook [link]

All broadband suppliers will be allowed to lay their own fibre cables in BT’s tunnels, the company has said. Opening up its “ducts” could potentially encourage the development of a superfast broadband network and save rivals billions of pounds that would have been needed to dig up the nation’s pavements.

It is also in line with calls from the Conservative Party, rivals such as TalkTalk and BSkyB and also with European movements to encourage free access.

Jeremy Hunt, shadow minister for Culture, Media and Sport, had said that a Conservative government would break BT’s monopoly on the network to promote a nationwide broadband target speed of 100mbps, and agreed with TalkTalk and Sky that access to ducts would allow a more effective market to operate.

BT, however, has denied that it has simply caved in to political pressure: “We told [industry regulator] Ofcom last year we’re willing to provide open access to our ducts and poles and we are working with them on how to achieve it. Other companies already have access to our exchanges so we’re relaxed about providing them with another form of access as well,” said the company’s chief executive Ian Livingstone.

Questions, however, remain over the extent to which BT’s rivals will really want to lay their own cables , even in BT ducts; while urban areas may appear commercially attractive, BT is itself laying down some fibre which other companies are allowed to use themselves. In rural areas, there is unlikely to be an appetite from new companies because there will be an insufficient return on the substantial investment required. TalkTalk issued a statement saying that “We’re at the forefront of the debate about how best to provide super fast broadband to our customers. We’re talking to BT and Ofcom and we’re considering a range of options including our own fibre trial.”

The Conservative Party has said that it would use any underspend from the part of the BBC’s licence fee that is currently earmarked to help fund digital switchover. When that is completed after 2012, the Party would consider matched funding or loans to try to encourage a more widespread high-speed broadband network.

Written By
admin
More from admin
Submitted by Mark in October 2016 I had been a customer with...
Read More