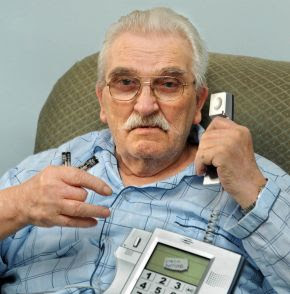 BT in the news again with another disgruntled customer! BT charged a disabled pensioner 100 pounds for an engineer to replace two AA batteries in his telephone. Bed-bound Alf Clarkson, 81, discovered a problem with his phone so asked daughter Susan to report it to the communication giants.

The next day an engineer fixed the glitch in under three minutes by two replacing batteries in the phone which Alf didn’t know were there. Alf, from Huyton, Merseyside, is blind in one eye and suffers from diabetes and arthritis in his hands and relies on the phone to keep in touch with the outside world.

It wasn’t until some weeks later that the retired welder received a bill for 99 pounds and 99 pence for the call out.

Daughter Susan Blackman, who reported the fault, is disgusted with BT and is demanding they give her father some of his money back.

Susan said: “The phone was bought for my dad as it had bigger numbers and an easy to read screen.

“We didn’t know the phone required batteries or we would have checked them before calling BT in the first place.

“My mum, Teresa, died some years ago so dad needs a phone as he is bedridden. It is there to keep him in contact with us and for him to use in an emergency.

“We thought there may be a charge of 30 pounds or so but when the bill came we were shocked.

“How can they charge an old man this sort of money for changing two batteries?

“The engineer wasn’t in the house longer than a few minutes.

“When I complained to BT they told me, ‘Think yourself lucky. The call out should have been about #136.’

“It is disgusting and BT should be ashamed. They ought to refund some of the money as it is way over the top for replacing worn batteries.

“If they have done this to my dad then I’m sure they are doing it to others. People need to be wary about calling them out.

“If I’d known what they charged I’d have just bought him a new phone.”

Alf, a father-of-five, who has 12 grandchildren and one great-grandchild, thinks BT are thieves and he will be changing his provider.

Alf said: “I was very shocked when I read the bill.

“It is certainly a lot of money for a pensioner to fork out just for a change of batteries.

“I am bed-bound and need the phone, so I panicked a bit when it was faulty and asked Susan to call BT.

“I won’t be staying with BT any longer. I not sure BT stands for British Telecom, its more like Blatant Theft.”

BT have defended their actions by claiming the charge covered the cost of calling out an engineer and the cost of running all the necessary checks on the phone. A spokeswoman said: “A member of the customer services team advised Mrs Blackman to try plugging in a different phone, as remote tests indicated the fault was due to the set itself.

“We are satisfied from our customer service records the customer was properly advised about the possible charges ahead of the engineer’s visit.”

Written By
admin
More from admin
Submitted by Macsen in November 2016 I am writing a complaint about...
Read More