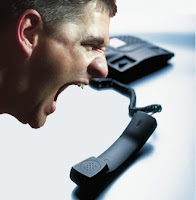 I have requested for the past 4 months now, that my broadband account is transferred from the business account it is registered with, to my own name but BT have failed to do so. This means that my previous employer – I stopped working for them on the 28th May – still pays for my internet connection which is not acceptable.

If I call 150 to get it changed, I am told to call 152 as the broadband contract is business but when I call 152, I am told to call 150 as the line is private! I have not managed to speak to the same person twice and nothing has happened. Changing the phone from business to private was painful enough and took more than a month from the original request!!! Changing broadband is impossible. I therefore had no options but leave BT and go to another provider.

As soon as my request to change provider was processed, BT’s customer services director, Nigel Stagg, sent me a letter to inform me that I would be charged £74.52 as I was terminating my BT contract early.

Interesting how BT have been incapable of providing me the service I requested over the last 4 months but it takes them a couple of days to charge me for terminating a contract that they never fulfilled!!!

On top of all this, I also had a major issue with my business broadband a couple of weeks ago and the service provided by BT was extremely poor. It took a week for the connection to be re-established, I spent hours on the phone with different people doing the same tests over and over again, to hear after 4 days that there had to be something wrong in my house causing the problem and therefore an engineer would have to come out two days later.

The next morning the connection was magically re-established, so I cancel the engineer and asked what had been done to repair the issue which had been going on for 5 whole days! “Nothing” was the answer. I was also told that BT could not guarantee a connection all the time! They never stipulated this in either of their advertisements or contracts!

I asked how I could send an official complaint when all this was going on and was given an e-mail address – complaints@btbroadbandoffice.com – which proved to be no longer in use.

BT advertise their service as “an easy way to de-stress and keep life simple. Get broadband, phone line and calls together in one easy package”. They have filled MY LIFE with stress and have failed to put everything in one single package, the very thing I wanted!

Written By
admin
More from admin
BT in the news again today – they won’t be hitting their...
Read More